To visualize an Edge Tangent Flow (ETF) vector field, you can use Line Integral Convolution (LIC). What you do is start with a noise image where each pixel is given a random grayscale value. Then, for each pixel of the noise image, you follow the flow/stream line that passes through the pixel going forward and backward so that the pixel is in the middle of the flow/stream line under consideration. You convolve (with a one-dimensional bilateral filter) the values along that stream line and assign the resulting average value to the pixel. In the output grayscale image, the actual grayscale values have no meaning, that is, whiter does not mean a stronger edge. 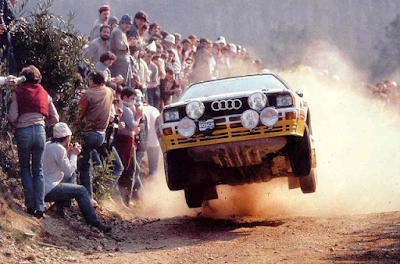 Edge Tangent Flow (ETF) visualized by Line Integral Convolution (LIC).
With a good imagination, one can kinda see a Vincent Van Gogh or Edvard Munch style in the LIC visualization of an ETF. ETFs are used quite a bit in Non-Photorealistic Rendering (NPR), in particular, in Stroke-Based Rendering (SBR) or Painterly Rendering as they provide a simple way to orient brush strokes. ETFs are also used in image abstraction and stylization.
Posted by Ugo Capeto 3D at 6:09 AM