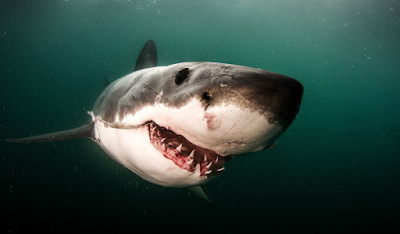 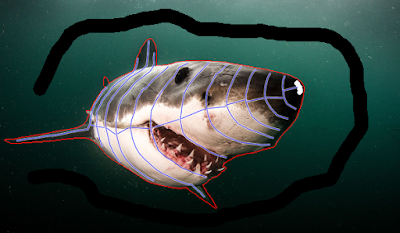 Reference image, sparse depth map, edge image, and gimp paths as seen in great_white.xcf.
The sparse depth map consists of a white blob for the tip of the nose and a black scribble to denote the background. I know it is a bit weird to relegate the water to the background but I don't see any other way to do it. Still, it kinda places the shark in front of the water. Weird, right. For the edge image, I simply traced the outline of the shark using the pencil tool (keeping the shift key pressed so that the line segments are always straight) with the smallest possible hard brush. The purpose of the edge image is to prevent the depths to bleed across object boundaries. The gimp paths are shown in blue. The ones that kinda look like half circles are the equal_depth paths. The ones that kinda connect the equal_depth paths together are the relative_depth paths. What is cool about using gimp paths is that it is very easy to modify them, in particular, it is very easy to change the relative depths between equal_depth paths as all you have to do is rename the relative_depth paths. 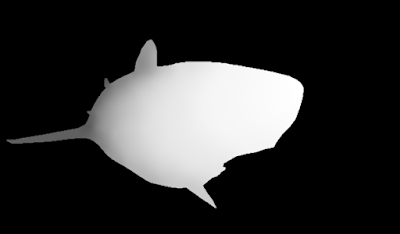 Wiggle/wobble created using wigglemaker.
Check the 3D effect on Facebook (no need to be registered or logged in into Facebook): Facebook 3D photo. I have got to say that Facebook did an excellent job rendering depth maps with their 3D photos. Clap clap!

This is kinda a trial and error process. So, to help me in visualizing the dense depth map, I use Depth Player. I think it is a great tool. Note that the depth map doesn't have to be too accurate if you just want to post it as a Facebook 3D photo.