When you view a 3D picture in the autostereoscopic LCD screen of the Fujifilm 3D W3 digital camera, the screen itself is the stereo window. The term "stereo window" is used extensively in 3D stereo photography and it's a good idea to know a little bit about it. It's a real big deal when mounting Realist format (or other format) slides, especially for stereo projection.

When you take a picture and "auto parallax control" is on (it's the default), as you press the shutter button half-way and focus on whatever object is in the middle of the frame, the parallax adjustment is made (automatically) such that this object is positioned right at the stereo window. Keep in mind that you can always focus (and set the parallax) and then re-frame while the shutter button is half-way pressed (it's called "focus lock").

When you adjust the parallax while viewing your 3D picture on the LCD screen, depending in which direction you press the button, things seem to be moving either towards you (possibly past the stereo window) or away from you. The question is: What's the proper parallax for my 3D pictures?

Usually, and as a starting point, it's a good idea to have the nearest object right at the stereo window. In stereo slide mounting, it's referred to as "near point" mounting. But what makes 3D stereo photography so spectacular is to have objects "pop" in front of the stereo window. Keep in mind though that you absolutely cannot have something in front of the stereo window that's clipped by the frame or screen. It's a cardinal rule of stereo photography that should never be violated as our poor brain cannot process too well the idea of an object being clipped by a window that appears to be actually behind that object.

When you play with the parallax button, you are simply moving the two "frames" closer or further apart. In stereo slide mounting, it's like moving the two film chips horizontally in the mount. You can see the left and right images slide (either in or out) as you keep the parallax button pushed. Note that when the two images coincide at a given object/point, that object/point should appear to be in the plane of the LCD screen, aka the stereo window, when the image is rendered in 3D. As the manual says, it's never a good idea to have too much parallax, so don't slide those images too much apart!

If you change the parallax of a 3D picture you are currently viewing and want to "save" the parallax settings, you need to do the following: 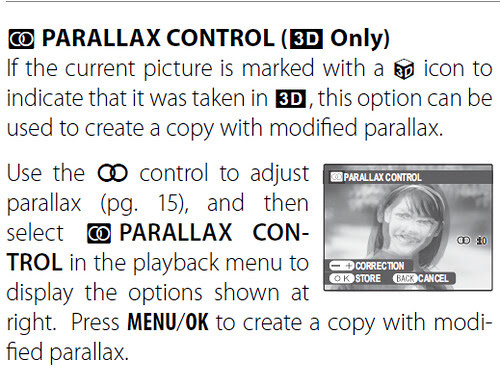 So, technically, it's not a "save" but rather a "copy", which is a good thing since you will always have the original parallax settings for that 3D picture (until you actually delete it).

Note that the parallax can also be adjusted off camera, in StereoPhoto Maker, for example.
Posted by Ugo Capeto 3D at 7:23 AM