We have previously looked into local methods to solve the stereo correspondence problem using windows (blocks) but we have kind of assumed that the contribution of a pixel around a reference pixel always carry the same weight, in other words, any pixel in the window contributes the same whether it's near or far from the reference pixel and/or its intensity is similar to or different from the reference pixel. This is something we are gonna delve into next thanks to "Adaptive Support-Weight Approach for Correspondence Search" by Kuk-Jin Yoon and In So Kweon. This is akin to adaptive-window methods but handled in a much simpler and natural way.

The idea is to give pixels in a window centered on a reference pixel a weight that depends on spatial proximity and color similarity. This allows the use of a fixed window size unlike the usual adaptive-window methods. You can find the very same methodology in bilateral filtering which is commonly used as an edge preserving blurring/smoothing tool in image processing.

Given a reference pixel p and a neighboring pixel q, this is how the support weight w(p,q) is computed: 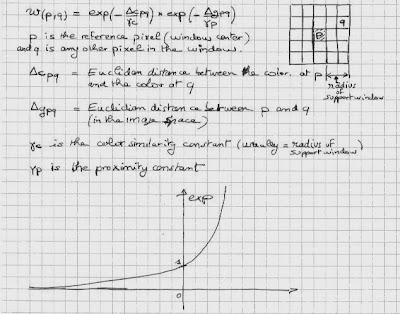 Let's look at how the weight distribution looks like in real-life examples (those are from the paper): 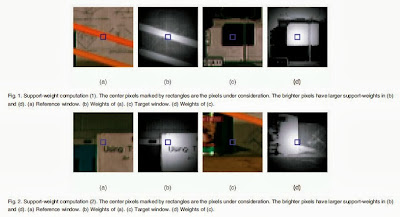 As you can see, the brighter pixels are the pixels which are similar in color to the reference pixel (marked by a rectangle). As you move away from the reference pixel, pixels that are similar in color get darker. Recall that brighter pixels have the heaviest weight and contribute the most to the matching cost. It's like adapting the window contour to the object the reference pixel is a part of. As the color similarity parameter (gamma_c) increases, the bright part of the window gets larger, in other words, more of the window carries a significant weight. It's a bit like increasing the window size in the usual non weight-based methods.

Given a pixel p and a disparity d, the matching cost for a given window size is given by: 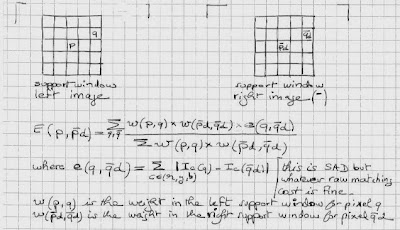 This matching cost based on weighted correlation windows can be used in local methods (Winner Takes All approach) but also in global methods (as the data term).

Let's look at the following neighborhood window/block (the reference pixel is at the center), play around with gamma_c and gamma_p, and see what kind of effects it has on the pixel weights: 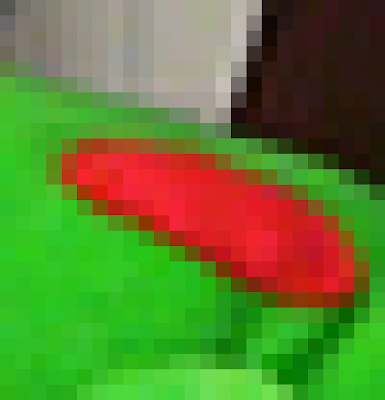 Let's first focus on the color similarity parameter gamma_c. If you set gamma_p to some very large value, it has no effect on the weights (the weights solely come from the color similarity term.) In the following series of pictures, I am only changing gamma_c and see the effect it has on the weights (black means weight equals 0, white means weight equals 1.) What you wanna see is white where there is red and various shades of gray anywhere else (the further away the color is from red, the blacker it should be): 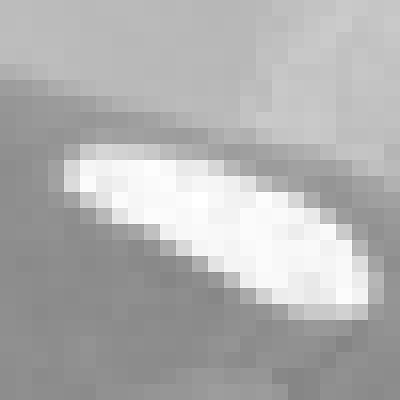 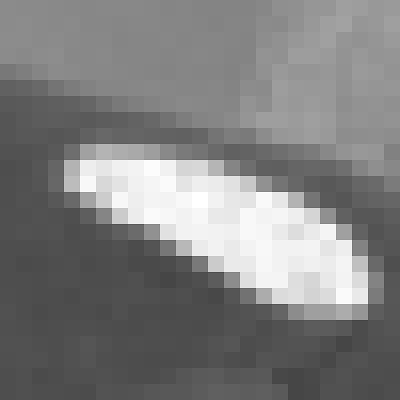 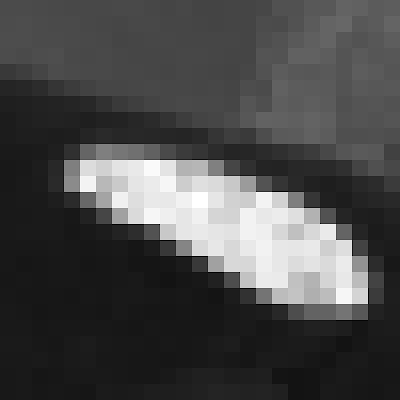 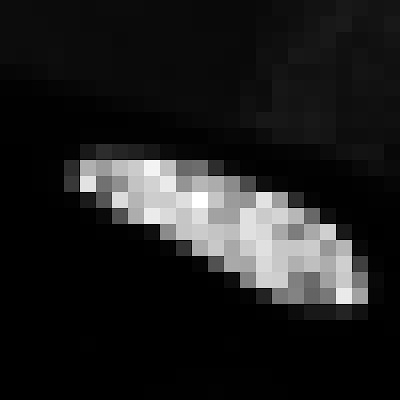 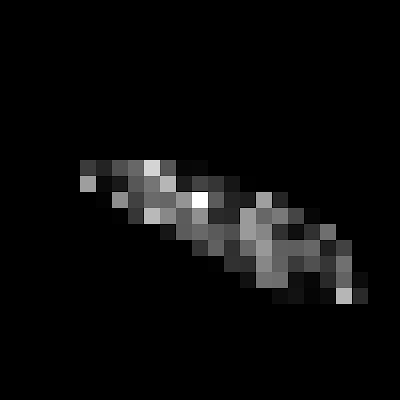 radius=12, gamma_p=1,000,000, gamma_c=5
Let's now focus on the proximity parameter gamma_p. If you set gamma_c to some very large value, it has no effect on the weights (the weights come solely from the proximity term.) In the following series of pictures, I am only changing gamma_p and see the effect it has on the weights (black means weight equals 0, white means weight equals 1.) What you wanna see is white at the reference pixel and darker shades of gray as you move away from the center: 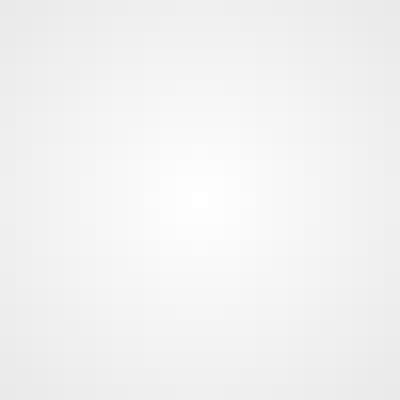 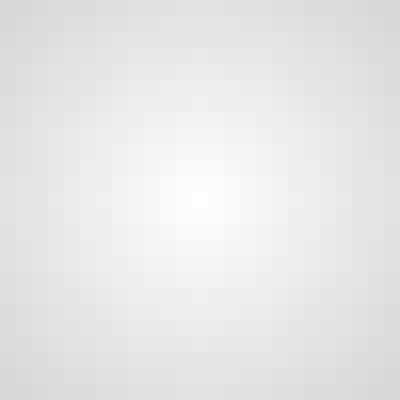 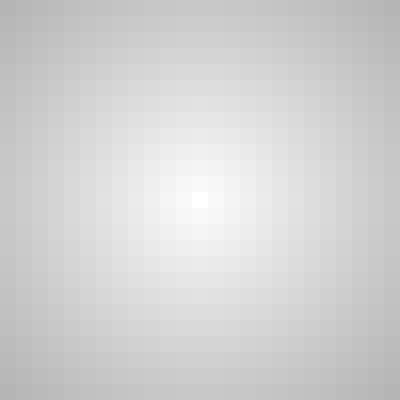 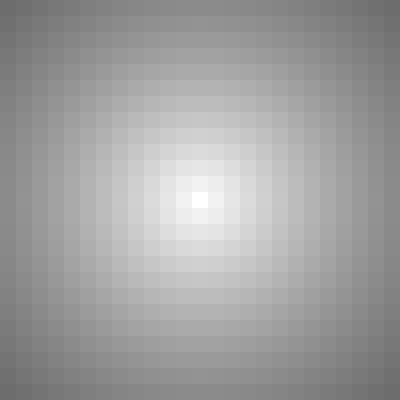 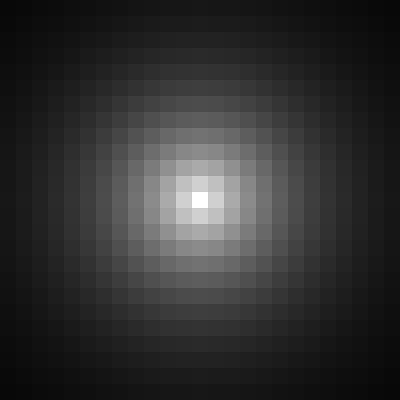 radius=12, gamma_c=1,000,000, gamma_p=5
It is worth noting that if both gamma_c and gamma_p are set to large values, all weights are equal to 1 and the method is basically a classic window-based or block-based stereo matching method. 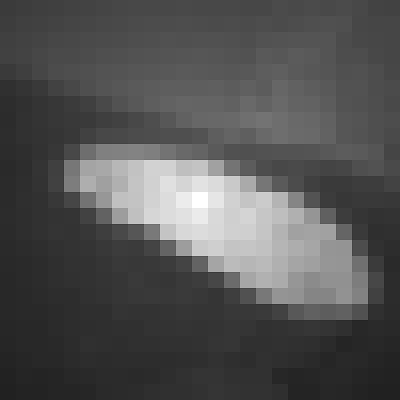