Let's start with a quite generic energy formulation (comes from Kolmogorov): 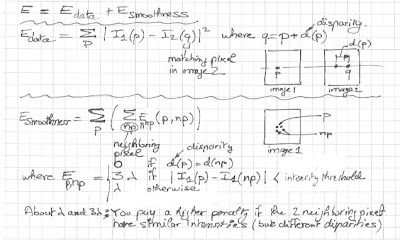 That energy has the classic data and smoothness terms. One could add an occlusion term (to penalize half-occluded pixels) but this is not discussed here.

Assuming that each pixel has received an initial disparity assignment (could be anything, really), let's consider what is called (by Kolmogorov) an expansion move, that is, any pixel can either keep its current disparity or change its disparity to alpha (chosen among the possible disparities, that is, any disparity between the minimum and maximum disparities, which are known). For each pixel p, let's consider a binary variable var that can either take the value 0 (keep disparity) or 1 (change disparity to alpha). 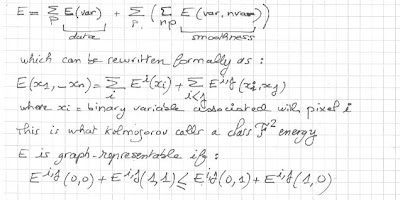 The energy described above is graph-representable according to Kolmogorov. If you want to use a different energy formulation, you sure can but you have to make sure the smoothness term (or any other term that depends on two variables) verifies the inequality shown above.

Maybe it's time to talk about graph cuts in the context of energy functions of binary variables, which is exactly what we are dealing with, here. The graph we are gonna construct has for nodes all the pixels whose disparities are not already alpha plus two special nodes: the source (S) and the sink (T). The edges of the graph are directed and carry non-negative weights. They are built for each pixel looking at the data and smoothness terms. We'll get to the graph edges later.

All that's left is to figure out how to add edges to the graph. This is done by looking (carefully) at each energy term. 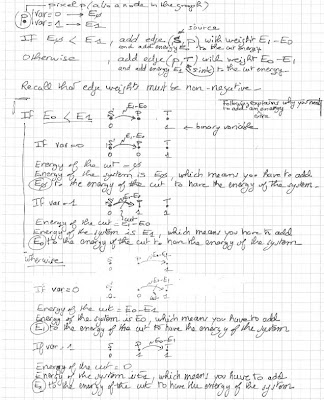 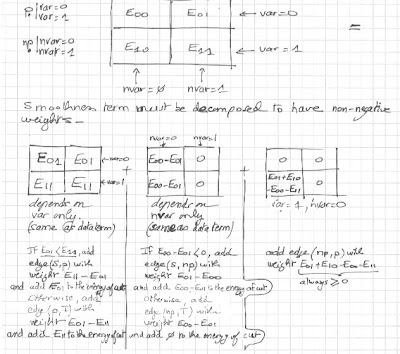 Note that it's not the only way to decompose the smoothness energy term. This particular decomposition comes from "Kolmogorov and Zabih's Graph Cuts Stereo Matching Algorithm" by Vladimir Kolmogorov, Pascal Monasse, and Pauline Tan. 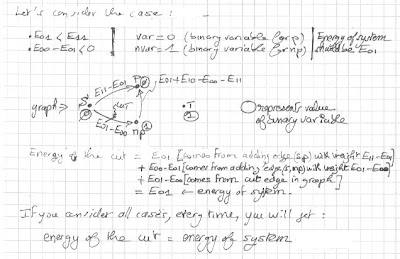 All that's left to do is find the minimum cut. Once that's accomplished, any node in the graph is either in the source set (var=0) or in the sink set (var=1). For any node in the sink set (var=1), the disparity of the corresponding pixel is changed to alpha. If you were to compute the new energy of the system, you would find that the new energy is exactly equal to the cost of the minimum cut (no surprise there since we have made sure that would be the case when building the graph). This is actually how you check your graph construction.