The "Random Walks" methodology used for semi-automatic 2D to 3D conversion is quite similar to the one used in semi-automatic image segmentation (see "Random Walks for Image Segmentation" by Leo Grady). The goal of image segmentation is to split an image into a set of homogeneous regions, say, in terms of color. A semi-automatic image segmentation approach relies on having the user indicate the number of regions (say, K) and paint a brush stroke (or less) within each region. The painted pixels are called "seeds". If one considers an image to be a graph (by connecting a pixel to its neighboring pixels with a weighted edge), the question that is to be asked for each unseeded pixel is as follows: Given a random walker starting at that pixel, what is the probability that he will first reach a seed associated with region S (S goes from 1 to K)? The edges are weighted (say, from 0 to 1) knowing that a random walker is much more likely to go along an edge whose weight is high (connected pixels are similar in color) than an edge whose weight is low. For now, let's assume this problem can be solved. It is then a matter of picking the highest probability for a given unseeded pixel to obtain the region it would reach first and associate the pixel with that region. Do this for every unseeded pixel and you've got your segmentation.

Now, how do you solve the "Random Walker" problem? Well, one way of doing so is by using an electrical circuit analogy. Given a region S, ground all seeded pixels that are not associated with S and put a voltage of unity to all seeded pixels associated with S, and solve for the unknown voltages using Kirchoff's Current Law and Ohm's Law. It's a linear system of equations which can be solved rather easily. In all cases, the obtained voltages are the probabilities we were discussing just above. The following pictures kinda explain the main points of the method. A great deal comes from Richard's Rzeszutek Masters Thesis entitled "Image Segmentation through the Scale Space Random Walker". 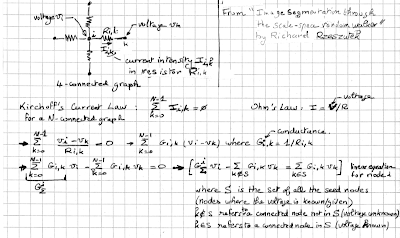 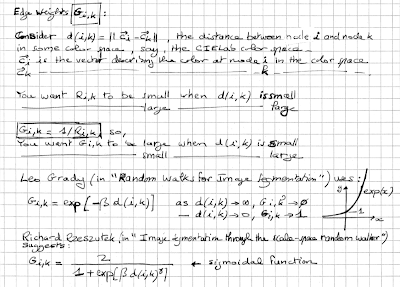 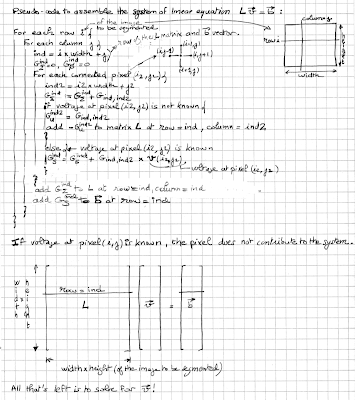 Matrix assembly.
Well, we can use the exact same methodology to do semi-automatic depth map generation for 2D to 3D image conversion. Again, the user is asked to work a little, but this time, he/she has to put down some depth values (shades of gray) using brush strokes, creating a sparse depth map. The depth values which vary from 0 to 255 (the grayscale range) are converted into voltages which vary from 0 to 1. Just like with image segmentation, using Kirchoff's Current Law and Ohm's Law, we obtain a system of linear equations, which, when solved, give the unknown voltages at the pixels that were not painted. Multiply the voltage by the grayscale range and you get a grayscale intensity or depth.

Random Walks, as is, is quite sensitive to noise, not unlike like many computer vision methodologies. To alleviate this problem, the Ryerson team uses a scale space approach which they call SSRW (Scale Space Random Walks) as opposed to plain RW (Random Walks). In the scale space approach, the original image is smoothed (convolved by an isometric Gaussian kernel) as many times as desired. By stacking the images on top of each other, the graph is given an extra dimension to make it a 6-connected three-dimensional graph. This apparently improves the quality of the depth maps produced but it comes at a price: the number of equations to solve is multiplied by the number of (smoothing) levels. See "Image Segmentation using Scale-Space Random Walks" by Richard Rzeszutek, Thomas El-Maraghi, and Dimitrios Androutsos for more info on SSRW. 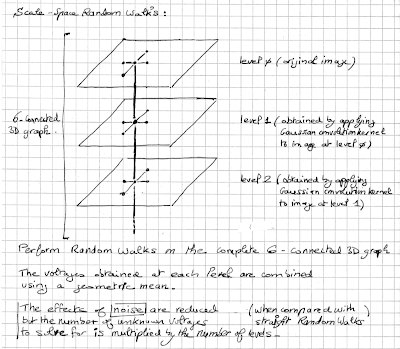 Scale Space Random Walks.
The following pictures were taken from "Semi-Automatic 2D to 3D Image Conversion Using Scale-Space Random Walks and a Graph Cuts Based Depth Prior" by R. Phan, R. Rzeszutek and D. Androutsos to illustrate the SSRW process: 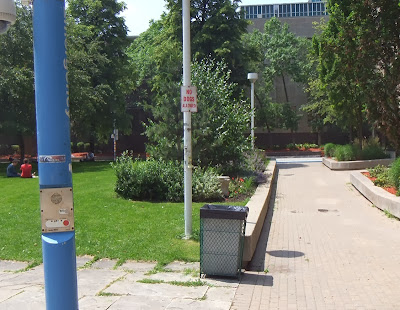 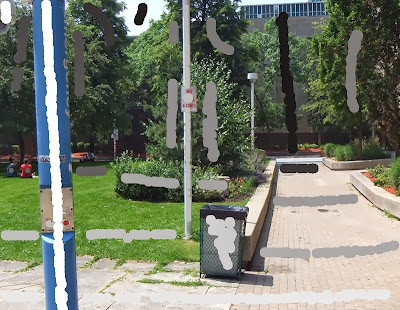 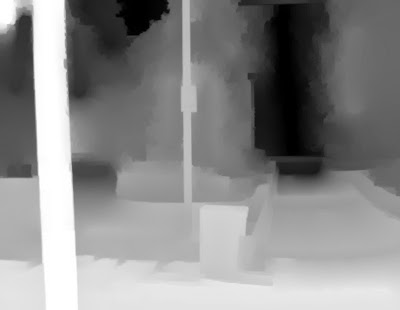