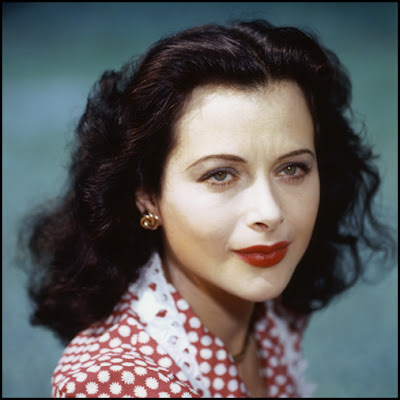 Hedy Lamarr.
This is the 2d image I started with, a picture of the legendary actress Hedy Lamarr.

So, I imported it into Blender using "Import->Images as Planes" (this way of importing things is an add-on that's included in Blender but you have to turn it on in "User Preferences"). First thing I wanted to do was to get rid of the background. After having subdivided the mesh that defines the plane of the image in "Edit Mode", I selected the vertices that were part of the background and deleted them. Of course, that could have been done in Photoshop with equal success. To replace that lost background, I created a plane right underneath the 2d image. To be honest, that was not really necessary to do. At that point, I went into "Sculpt Mode" and sculpted Hedy's face, hair, and shoulders with the help of the "Multiresolution" modifier. For the animation, I placed the camera right above the image and made Hedy's sculpted image rotate using two key frames. 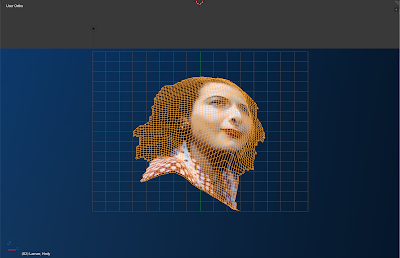 This shows the deformed mesh associated with the 2d image object in Blender. I am obviously not a sculptor of forms, but it does not have to be too perfect for our purposes.


This is the rendered animation posted on youtube (It's very short!) Obviously, it's quite tough to sculpt the 2d image so that the all the frames look realistic. I guess it's a matter of how much time you have and how accurate you want it to be.

If you prefer an animated looping gif, here it is: Hedy Lamarr (2d to 3d conversion).

The cool thing about Blender when doing 2d to 3d conversion is that you can sculpt the 2d image with the texture on (In other words, you can see the 2d image deform in real time as you sculpt.) and the wireframe on (This enables you to better see what you are doing and also to keep an eye on mesh distortions.) Instead of creating an animation like I did here, one can certainly generate individual frames for the purpose of making a lenticular, for example.

Converting a 2d image into 3d using sculpting is quite easy for this type of 2d images where the z displacement is not large and everything is continuous in terms of z-locations (assuming the 2d image is in the x,y plane). For anything slightly more complex, I believe that the work that must be done then, which probably includes full modeling of the 3d scene and "uv mapping" of pieces of the 2d image onto the corresponding pieces of the 3d scene, is quite tedious. And that's assuming you have a pretty good grasp of 3d modeling in blender. Otherwise, well, you better hit the Blender books and tutorials. If nothing else, it's a cool way to learn Blender (I guess.)
Posted by Ugo Capeto 3D at 10:25 AM