Depth Map Automatic Generator 7 (DMAG7) is an implementation of "Fast Bilateral-Space Stereo for Synthetic Defocus" by Jonathan T. Barron, Andrew Adams, YiChang Shih, and Carlos Hernández. It is a global method that uses a bilateral filter in the smoothing cost of the cost function. The cost function for which a gradient can be obtained analytically is minimized with L-BFGS.

If you'd rather read the Cliff notes rather than the paper itself, you are invited to go over Fast Bilateral-Space Stereo for Synthetic Defocus for a quick overview of the method and some pictures.

This is the first time I don't use Qt as a graphical interface (it's just too much of a hassle to deal with in windows, at least, for me). I am providing a batch file (dmag7.bat) to launch the executable from the directory the stereo pair resides on your computer. In this batch file, the path to dmag7.exe must be changed so that it is the correct path for your computer (depends on where you decompressed the archive). The input file dmag7_input.txt must also be copied onto that same directory (where the stereo pair is). It must be edited so that the names of the left and right images are correct. The various parameters in the input file are explained in dmag7_manual.pdf. Because I don't use Qt anymore, I had to write read/write routines for the main image format players. For now, the supported image file formats are: tiff, png, and jpeg.

Just to be clear, you copy dmag7.bat to where your stereo pair is, edit it so that the path is correct and double-click it to run DMAG7. You also need to copy the input file dmag7_input.txt to where your stereo pair is and edit it so that the image names are correct. The parameters that govern DMAG7's behavior can be changed by editing dmag7_input.txt. To edit a file, you can certainly use good ole "notepad" or whatever you are used to.

As always, if you have trouble with the software, send me your stereo pair and input file and I will take a look (but on my linux box). If the images are quite large, like more than 4 megapixels (which is not that large in the photography world), you may want to reduce the size just to make sure the program runs properly on your computer. Then, you can see about increasing the size but it may take a while depending on how much memory you have one board. You can monitor memory usage with windows task manager. If the memory used goes beyond your RAM memory limit and the virtual memory limit, the program will crash. If the memory goes beyond your RAM memory limit but stays below the virtual memory limit, the program will not crash but will be slow because it has to use the hard disk like it were memory (it's called paging). Ideally, you don't want paging to occur unless you don't need the computer for a while as it will be unusable until the program that's causing the paging either finishes or crashes. 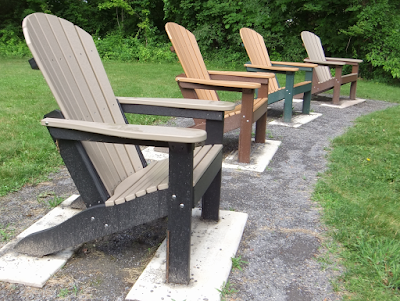 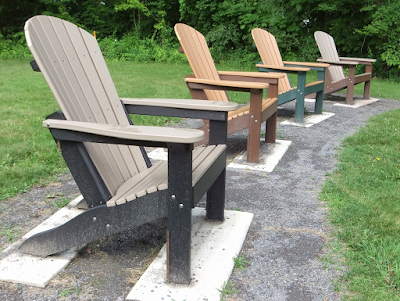 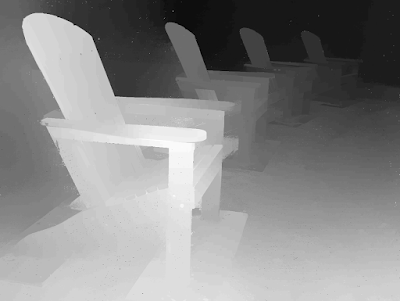 "Adirondack chairs" stereo pair (depth map produced by DMAG7).
I haven't done so in the above example but I strongly suggest smoothing the depth map obtained by DMAG7 with Edge Preserving Smoothing 7 (EPS7).

The windows executable (guaranteed to be virus free) is available for free via the 3D Software Page.
Posted by Ugo Capeto 3D at 2:35 PM