When you scan a three-dimensional object, you end up with a point cloud (points on the surface of the object). The process of creating a three-dimensional model off that point cloud is called "surface reconstruction". There are many surface reconstruction methods but here, we are gonna focus on methods based on the Delaunay triangulation. Actually, we are even gonna restrict ourselves to methods based on the Delaunay triangulation which carve/sculpt the mesh away. The starting point of such methods is a Delaunay triangulation of the convex hull defined by the point cloud which is then carved away until, hopefully, the mesh accurately represents the scanned object. The pioneering paper on this methodology is: "Surface Reconstruction by Wrapping Finite Sets in Space" by Herbert Edelsbrunner. A more approachable paper is probably: "A geometric convection approach of 3-D reconstruction" by Raphaëlle Chaine. Edelsbruner talks about flow as the driving force of his algorithm. For Chaine, it's convection, but it's basically the same exact thing. So, I think it may be a good idea to refer to this type of approaches as flow-based. Other Delaunay based surface reconstruction approaches include the so-called "crust" algorithms pioneered by Nina Amenta and Marshall Bern but we are not gonna talk about those here.

We basically want to remove elements from the boundary in until we get this (the two-dimensional model in mesh form):

The two equivalent ways to tell if an element connected to a boundary edge should be removed: 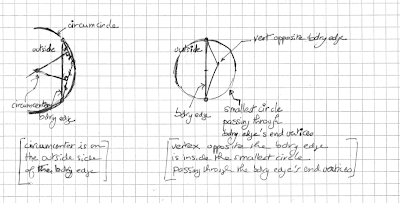 Here's the pseudo code for the carving or sculpting algorithm that starts from the Delaunay triangulation of the convex hull and ends with the proper (or not so proper) mesh of the two-dimensional model:

Of course, it can't be that easy, all the time. In some cases, the algorithm above may terminate prematurely. Here's an example:

When this happens, the element must be deleted manually or some heuristics based on element size must be used. The algorithm above then continues where it left off. This is clearly the Achille's heal of the method since any decision making based on size can be dicey when sampling is not dense enough.

Here's the pseudo code for the carving or sculpting algorithm that starts from the Delaunay triangulation of the convex hull and ends with the proper mesh of the three-dimensional model: 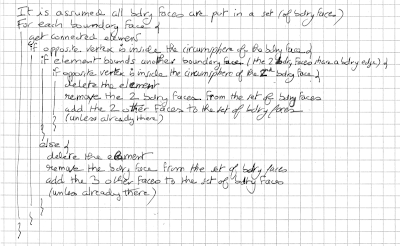 In reality, it's a bit more complicated than that since you also have to deal with boundary faces that become disconnected (dangling boundary faces), which may have to be carved away as well (using a methodology similar to the two dimensional case). This may come as no surprise that when all is said and done, you may have to manually delete some elements (or use some potentially dangerous heuristics based on size) and restart in order to get the mesh you really want. The big issue is how much of this manual deleting has to be done. In two dimensions, it may not be too big of a deal but in three dimensions, it may be a problem. Unless there's a "good" automated way to perform those manual deletions, I don't see how a Delaunay based surface reconstruction like this one can be that useful.

What this methodology is lacking is a global view of the problem especially when you have to do manual deletion to "unstuck" the algorithm. It's very hard to tell if an element should be removed (is outside) when all the information at your disposal is very local. This in contrast with another Delaunay-based explicit method called Eigencrust ("Spectral Surface Reconstruction from Noisy Point Clouds" by Ravikrishna Kolluri, Jonathan Richard Shewchuk, and James F. O’Brienwhich) which partitions a graph that connects the elements to find the surface in one global operation (a costly proposition though, clock wise).

Delaunay-based methods like this one are referred to as explicit because there's no surface approximation involved, in other words, the surface passes through points that are actually in the cloud (To be pedantic, the surface is interpolated, not approximated.) This is unlike implicit methods like Poisson or "marching cubes" that approximate the object's surface. Note that those implicit methods need a good normal extrapolation scheme to be effective whereas an explicit method doesn't. If one is able to get decent, consistent with each other normals, a Poisson surface reconstruction ("Poisson Surface Reconstruction" by Michael Kazhdan, Matthew Bolitho and Hugues Hoppe) is extremely hard to beat.
Posted by Ugo Capeto 3D at 1:44 PM