Let's look at how the left and right interpolated images are defined: 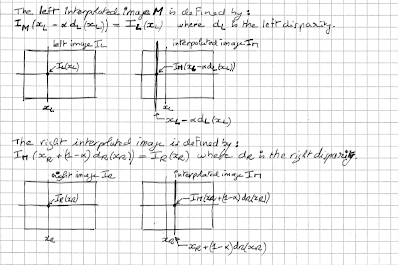 Clearly, the term xL-alpha*dL(xL) is not an integer in most cases. The easiest way to deal with this problem is to round it to the nearest integer. The hardest way is probably to add color contributions to the 2 nearest pixels on either side of xM'. This is way beyond the scope of this blurb but it is known as "splatting" if you want to delve into it. The resulting interpolated image will have cracks and holes. The cracks come from that nearest integer business (no big deal) and the holes come from scenes in the image that are now revealed.

As a side note, if you don't have a right depth map and therefore there is no right interpolated image, holes (coming from a left image and a left depth map) are usually filled by getting the first non-empty pixel to the right and using its color to fill the hole, line by line. It's easy to spot as it produces very distinctive streaks. Another option is to propagate its color toward the left but considering the whole image (as opposed to line by line).

The idea behind backward mapping is that, given a pixel xM in the intermediate image, you want to be able to get its color by using linear interpolation on the left (right) image. Because of this, the interpolated image will be guaranteed to have no cracks or holes. It doesn't mean the interpolated image will be perfect. The holes that you would get with a forward mapping won't be there but their filling (inpainting) might not be the best.

This above can be done scanline by scanline (Scanline is a fancy way of saying horizontal line.) There might be more than one segment that contains xM. In that case, it's a good idea to consider the segment corresponding to the largest disparity (the most foreground object). Also, the segment search needs only be done within the minimum and maximum disparity (times alpha) that corresponds to the stereo pair.