"The Painter" is software to painterly render a photograph. Details of the methodology can be found in Non Photorealistic Rendering - Stroke-Based Rendering (SBR).

The file that controls the input to the software is "thepainter_input.txt". It should look like this:

Line 1 contains the name of the reference photograph you want to render (here, content_image.png). There should be no spaces in the image name.

Line 2 contains the name of the initial canvas rgb image. I would not worry too much about that one and just use ../texture/canvas01/rgb.png.

Line 3 contains the name of the initial canvas bumpity image. I would not worry too much about that one and just use ../texture/canvas01/bumpity.png.

If your final rendered image shows relatively large portions of unpainted canvas, then you may want to change to another canvas.

Line 4 contains the number of brushes that are gonna be used to paint the canvas (here, 6).

For each brush (going from large to small), there should be a line in the following format:

The brush radius "brush_radius" is the radius of the brush to be used to paint the strokes on the canvas. You don't want to use a brush radius that is too small since the painting is gonna look exactly like the photograph, which is not what you want. Here, with a reference image that's 2048 pixels high (the largest dimension), I am using the brush radius sequence: 128, 64, 32, 16, 8 (and another 8 with a shorter brush) but, if the reference image were larger (say, twice as large), I would probably use the sequence 256, 128, 64, 32, 16 (and another 16 with a shorter brush). It all depends on the size of the photograph you are starting with. And the style you want (coarse or fine).

The brush index (brush_ind) controls which brush texture is going to be used for that particular brush size. It is an index into the brush textures list going from 0 to (number of brush textures - 1).

Line 11 contains the number of brush textures to be used (here, 2):

Line 16 contains the name of the output canvas rgb image (here, canvas_rgb_image.jpg). There should be no spaces in the image name.

Line 17 contains the name of the output canvas bumpity image (here, canvas_bumpity_image.jpg). There should be no spaces in the image name.

I am calling the brush height map the brush bumpity map because it rhymes with brush opacity map. It's really a brush bump map which is applied to the canvas bump map (aka canvas height map or canvas bumpity map). The brush bumpity map describes the height of the paint that's deposited by the brush. If the grayscale value is black, there is no bump and the paint is laid flat. The whiter the value, the more height the paint will have when it is deposited by the brush stroke. Here, we are simulating impasto oil painting which is characterized by thick layers of paint.

Now that we have a better idea of what's in "thepainter_input.txt", let's see the what "The Painter" does on that reference photo (the one from the "waterlilykiwi" directory). 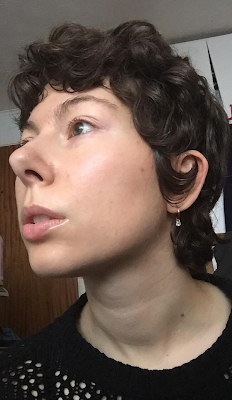 This is the reference photograph aka the content image. 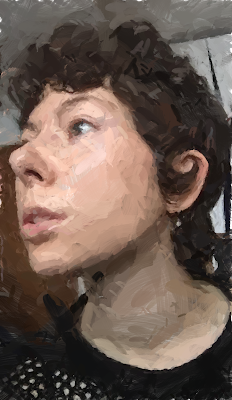 This is the canvas rgb image produced by "The Painter". 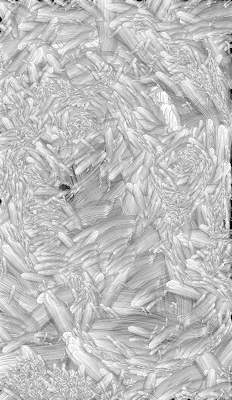 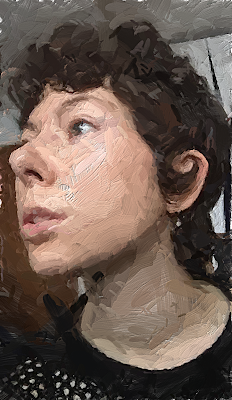 This is the canvas rgb image bumpmapped.
Here is a video tutorial for thepainter:


Here is another video tutorial for thepainter:


Heres is another video tutorial for thepainter:


A few tips:
- It is a really good idea to apply several passes of blurring to the reference image aka content_image.png before running thepainter in order to get rid of unnecessary details. Click on Filters->Blur and then select Gaussian Blur, Median Blur, or Selective Gaussian Blur. In my opinion, this is a must. I use the default settings and apply the blurring several times. That seems to do the trick. Personally, I like Median Blur best.
- It is probably a good idea to limit the grayscale values of the bumpity map aka canvas_bumpity_image.png to be between 128 and 255. To do that, click on Colors->Levels and then put the value 128 in the left "Output Levels" value box. That way, when you apply the bump map, pixels in the canvas image aka canvas_rgb_image.png will never sink below the neutral plane at middle gray. Note that you will probably have to increase the height when applying the bump map to the canvas image (use 12 instead of 6, for example).
- It is probably a good idea , once you have created the bumpmapped image, to sharpen it a bit to enhance the visible brush stroke feel. Click on Filters->Enhance->Sharpen (Unsharp Mask). I usually apply the sharpening filter up to 3 times.
- If there are areas in your "painting" that don't look quite right, you can certainly run thepainter using various input files and combine the results in Gimp using layers and the Eraser tool.
- If you want to use your own brushes, google something like "oil brush png" and you will find tons of brushes to choose from.

"The Painter" is free to download at Painting Software.
Posted by Ugo Capeto 3D at 9:47 AM