I have combined elements from two academic papers to create my own Stroke-Based Rendering (SBR) software. I used "Painterly Rendering with Curved Brush Strokes of Multiple Sizes" by Aaron Hertzmann for the general framework but I didn't particularly like his curved brush strokes. I prefer straight strokes with an oil paint texture. So, I turned to "An Algorithm For Automatic Painterly Rendering Based On Local Source Image Approximation" by Michio Shiraishi and Yasushi Yamaguchi to handle the brush strokes.

The following 2 images show the pseudo-code for the framework. They come straight from the Hertzmann paper. 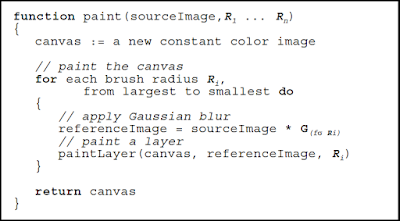 The input is an RGB image (sourceImage) and a sequence of brush radii of decreasing size (R1 to Rn). The output is an RGB image (canvas) which is initialized to some middle gray color. For each brush radius, the source image is convolved by a Gaussain blur of variance f_sigma * Ri where Ri is the current brush radius. The parameter f_sigma is some constant factor that enables to increase or decrease the blurring. If f_sigma is set to a very small value, no blurring takes place. A layer of paint is then laid on the reference image (blurred source image) using the paintLayer function described below. 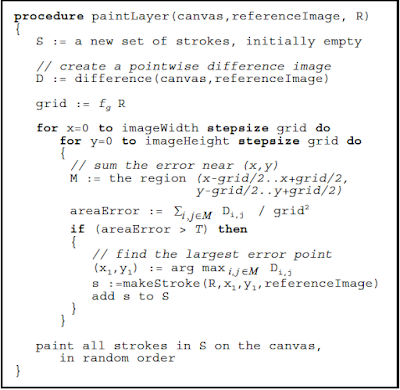 As mentioned previously, I don't like curved brush strokes as I don't think it reflects particularly well what most fine art painters do. Straight brush strokes are in my opinion better and they are much easier to implement. Let's turn now our attention to the Shiraishi paper to make and paint the brush strokes.

To paint a given brush stroke, a rectangular grayscale texture image (where white means fully opaque and black means fully transparent) is scaled so that it matches the equivalent rectangle in terms of width and height, rotated by theta, translated so that its center matches the brush stroke center, and then painted onto the canvas using alpha blending. If you want to be real fancy and somehow simulate the impasto technique where thick layers of oil paint are applied, you may also use a rectangular grayscale bump map image alongside the texture image and a bump map alongside the canvas. 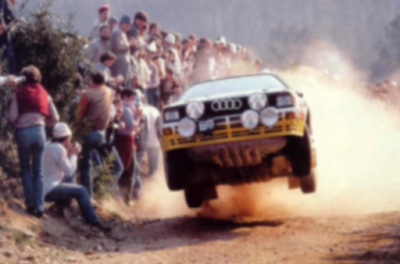 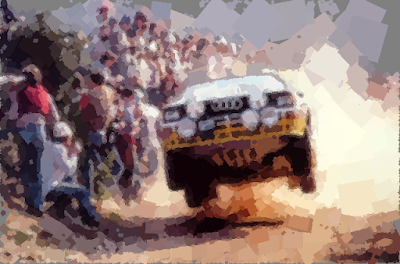 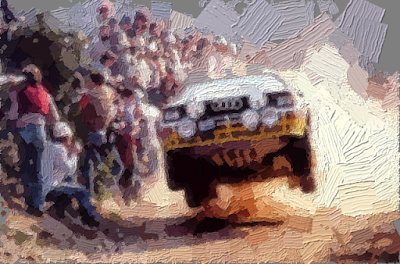 A few notes:
- I use a very small f_sigma so that the reference image never gets blurred. Because of that, the input image needs to be slightly blurred as high frequency artifacts could be a problem when evaluating the image moments.
- I always use f_grid = 1.0. That's why it's not a parameter.
- To render the bump mapping, I use Gimp as it has a very convenient bump map filter.


At the moment, the software is sitting on my linux box but it is not available for download. If you like this type of painterly rendering, feel free to send me your photographs and it will be my pleasure to "paint" them for you.
Posted by Ugo Capeto 3D at 6:13 AM