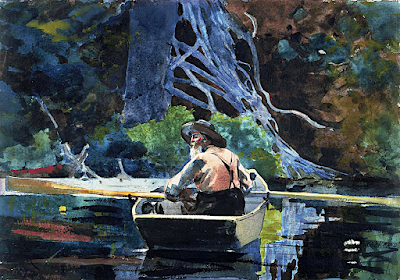 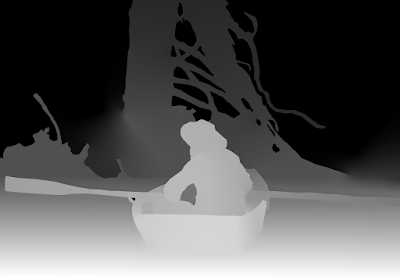 Dense depth map generated by the3dconverter2.
It took me about 2 hours of trial and error and I must say that I was completely drained when I decided it was time to quit and call it a day. This depth map has obvious errors which I am just discovering now. I completely forgot about the hole around where the left oar holder is. Also, I put the hole between the left arm and leg of the guide at the wrong depth. Last but not least, I completely ignored the depth discontinuity on the right side of the boat leaving a gigantic hole, which would prevent any boat from floating, I think.


Follow me on youtube if you want more in-depth videos since those are a bit painful to make.
Posted by Ugo Capeto 3D at 2:31 PM No comments: