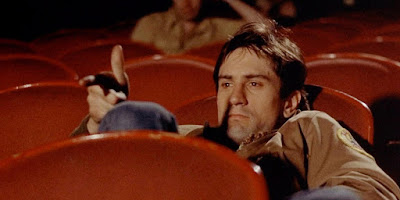 Still frame of Robert de Niro in Taxi Driver.
The stereo conversion (2d to 3d conversion) of an image is not an easy thing to do since you kinda have to visualize the scene depicted in the 2d image in 3d space. Depth Map Automatic Generator 4 (DMAG4), the premier semi-automatic stereo conversion software, can make things easier. The input to DMAG4 is a sparse depth map that shows depth with grayscale values. It is typically painted in a layer on top of the 2d image with the pencil tool (and the gradient tool). DMAG4 then generates a dense depth map by propagating the grayscale values according to proximity in the color space of the 2d image. Because of this, there is usually no need to be too precise regarding object boundaries when painting the sparse depth map. 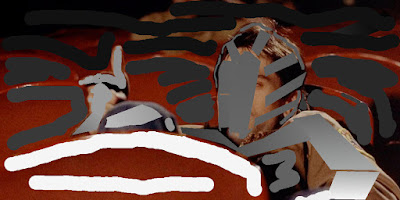 Sparse depth map (input to DMAG4) painted in a layer on top of the reference 2d image. 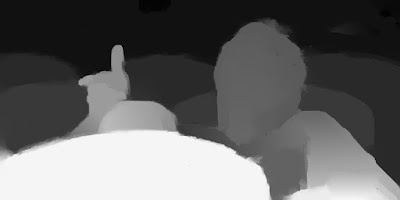 Dense depth map obtained by DMAG4.
Now, to visualize the 3d scene, I really like to use an animated gif. There are two ways to obtain an animated gif from a reference image and a depth map:
- "wiggle maker"
- "depth map viewer"