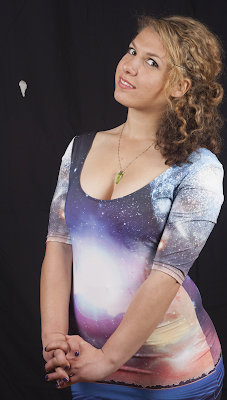 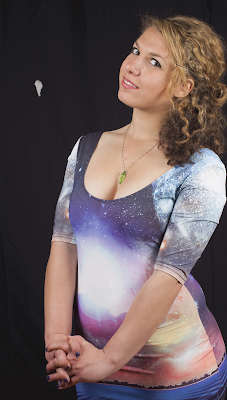 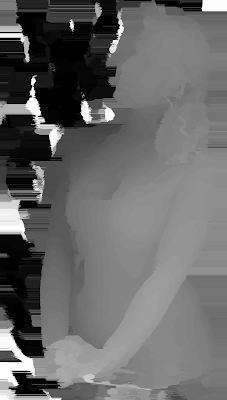 Depth map obtained by DMAG5 using min disparity = -54, max disparity = 25, window radius = 30, alpha = 0.9, truncation (color) = 7, truncation (gradient) = 2, epsilon = 4, and Nbr of smoothing iterations = 0.
This is actually a pretty good depth map with good smoothness except in the lower body area. Of course, the depth for the background is completely wrong but that's an easy fix in post-processing. 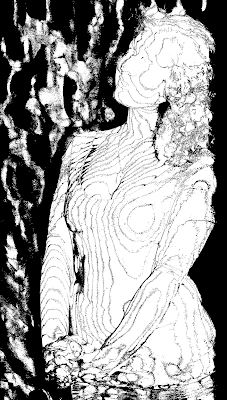 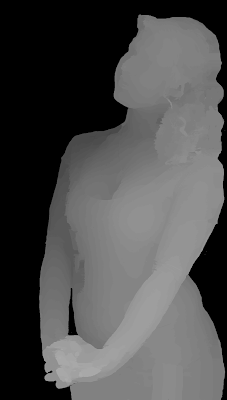 Depth map after (minimal) post-processing in Gimp.
Clearly, I've fixed the background depth but I have also worked in the lower part of the image. I've used Gimpel3d to render the 3d scene and The Gimp to modify the depth map. The way I work in The Gimp is by making selections in "quick mask" mode using the left image and painting over the selections in the depth map (When you paint over a selection, you can be pretty sloppy because you cannot change what's not in the selection aka the mask.) I always save my selections as channels just in case they might be needed later.

Wigglegram made with Gimpel3d and The Gimp.
I've used Gimpel3d to generate the frames on either side of the left image and The Gimp to make the animated gif (It's quite easy to do using "Open as Layers" in the "File" menu.) The youtube video below shows the process (for posterity):